A Visit with Dolley Madison 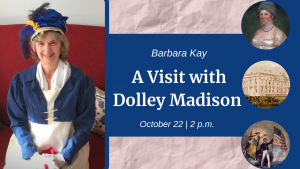 A Visit with Dolley Madions on October 22 at 2 p.m.

Come for a visit with First Lady Dolley Madison and hear her stories!

October 22, 2022, at 2 p.m. in the Lewis & Clark State Historic Site Interpretive Center Theater – Free & Open to the Public
The lives and roles of our nation’s first ladies have always fascinated Americans. Unfortunately, some people only know the myths surrounding these women and few know the actual stories or the impact they had. This is true of Dolley Madison. She did more than just save a portrait of George Washington. Her actions during the War of 1812 helped shape the role for future first ladies. In first person and in costume, Barbara Kay will portray Dolley Madison and tell the story of her life with an emphasis on the War of 1812, accompanied by audience involvement. The future State of Illinois had its fair share of fights and battles. People will see how this war gave rise to new towns and early Illinois leaders got their start in public service during the war. Dolley Madison helped her husband James Madison lead a divided nation as not everyone in 1812 supported the war or liked the president –very similar to today’s political climate.
The period of Dolley Madison and the War of 1812 fits perfectly with the changing times and shifting cultures the men of the Corps of Discovery lived in. A number of soldiers from the Lewis & Clark Expedition re-enlisted during the war and experienced the conflict first-hand. Kay’s Dolley Madison will help bring that into a clearer context and then provide further insight during a Question and Answer session following the presentation.
About the presenter:
Barbara Kay is a retired high school history teacher. She now brings famous women from history alive with first person presentations. Kindergartners through senior citizens have enjoyed and learned history with Barb. It has been Barb’s privilege to be a five-time Illinois Road Scholar. Born and raised in St. Louis, MO, she and her husband now make Glen Carbon, Illinois their home.