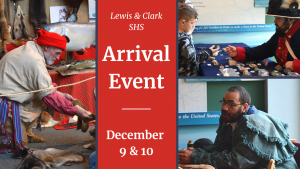 On December 12, 1803, the Lewis & Clark Expedition arrived at the confluence of the Mississippi and Missouri Rivers and fixed on a place to build Camp River Dubois. Arrival Weekend [December 9 & 10] celebrates this arrival with reenactors, demonstrators, and more!
The event will feature exhibitors of vintage tools, firearms, 18th Century medicine, military re-enactors, and artillery. Come see how the soldiers of the Corps of Discovery lived during their winter encampment in the Illinois Country from 10 a.m. to 4 p.m.
St. Nicholas will also make an appearance for pictures and maybe a treat each day. Come learn about early Christmas traditions in early 19th Century America.