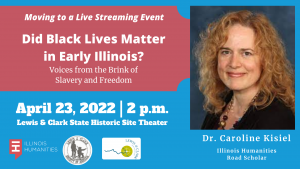 *This event will now be moved to a live-stream event on Zoom. It will still take place on April 23 at 2 p.m. The Zoom link can be found here: INSERT LINK BEFORE EVENT. Lewis & Clark State Historic Site will still host a live viewing of the stream in the Interpretive Center Theater for those wanting to meet in person or wanting to avoid the digital hassle. Dr. Kisiel will also be doing a Question and Answer session following the hour long presentation.
Lewis & Clark State Historic Site will be hosting a presentation exploring the struggle over slavery in early Illinois History. Hearing the words of 19th Century pro-slavery figures like territorial governor Ninian Edwards and anti-slavery figures like Governor Edward Coles, visitors will experience the tension in bringing about Illinois statehood while navigating slavery politics.
Dr. Caroline Kisiel of DePaul University will present her program, “Did Black Lives Matter in Early Illinois? Voices from the Brink of Slavery and Freedom” on Saturday, April 23, 2022, at 2 p.m. in the Lewis & Clark State Historic Site Interpretive Center Theater.
This free hour-long program will use the words of past movers and shakers in Illinois as they debated slavery in the newly forming state. Dr. Kisiel will open to questions and answers following the program. The program is made possible by the Illinois Humanities Road Scholar Program and the Lewis & Clark Society of America.
Who were these voices advocating for a permanent constitutional change to allow slavery? And who stood up against them, preserving the free state of Illinois we know? And ultimately, in what ways did these opposing voices support Black lives, or not? This performance-presentation offers a dramatic reading of the voices of three key pro-slavery figures in Territorial Governor Ninian Edwards, Secretary of the Illinois Territory Joseph P. Phillips, and pro-slavery delegate Adolphus Frederick Hubbard. Featured voices of anti-slavery figures include Governor Edward Coles, anti-convention legislator Nicholas Hansen, and English emigrant and Illinois Secretary of State Morris Birkbeck.
While stories of prominent antislavery figures from later years are more widely recognized (Elijah Lovejoy, Abraham Lincoln), the very early years of statehood were marked by a significant struggle for and against slavery that illuminates the inheritance of what some called “old slavery” in the region, and what was often benignly masked as “servitude.” Historical records offer these six figures’ words, which will be given a voice in the twenty-first century through this performance-presentation.
Illinois Humanities is supported in part by the National Endowment for the Humanities (NEH) and the Illinois General Assembly [through the Illinois Arts Council Agency (IACA)], as well as by contributions from individuals, foundations, and corporations. Any views, findings, conclusions, or recommendations expressed by speakers, program participants, or audiences do not necessarily reflect those of the NEH, Illinois Humanities, IACA, our partnering organizations, or our funders.
All participants and guests at the event will be required to observe current guidance from the CDC and Illinois Department of Public Health regarding face coverings and social distancing.
Lewis and Clark State Historic Site is located in Hartford, Illinois. The Interpretive Center and reconstructed Camp River Dubois reveal the important role that Illinois played in the Corp of Discovery’s preparations as they wintered from December 1803 to May 1804. The site is open during the summer from 9 a.m. to 5 p.m. daily. Winter hours are Wednesday through Sunday, 9 a.m. to 5 p.m. Lewis and Clark State Historic Site is managed by the Illinois Department of Natural Resources and is supported by the Lewis and Clark Society of America.
+ Add to Google Calendar